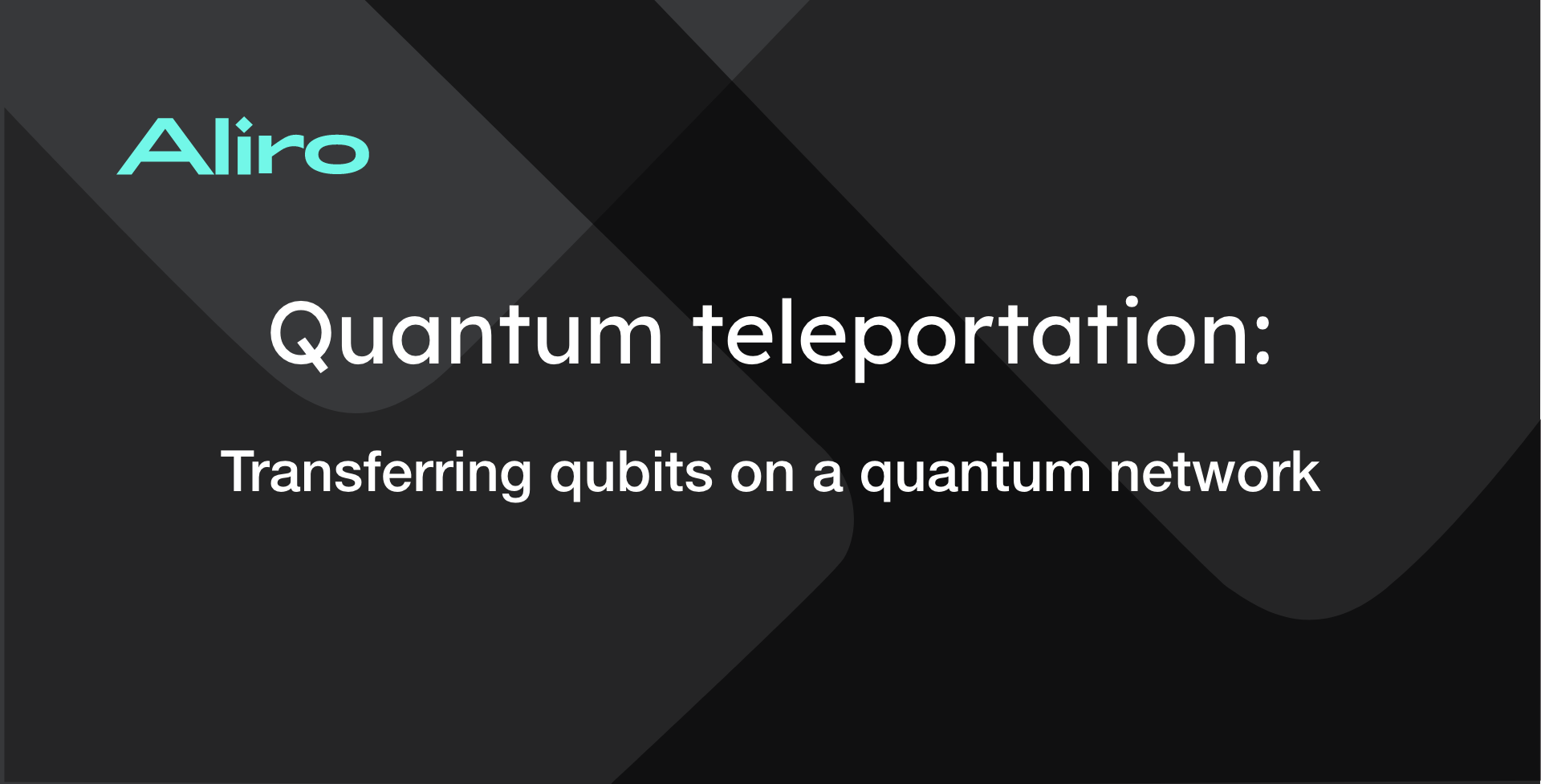 While its name may sound like science fiction, teleportation, the process of transmitting qubits, is a fundamental building block of the quantum internet. A qubit contains a unit of quantum data, known as a quantum state, just as a bit contains a unit of information on the non-quantum, or “classical,” Internet. Unlike in the classical internet, qubits aren’t transmitted directly. Instead, the fundamental goal of the quantum internet is to distribute entanglement, the quantum phenomenon that connects qubits even over long distances. Teleportation is the name for a process that uses entanglement to transmit qubits across long distances. In this blog post, we will dig into the details of how teleportation works.

First, let’s take a look at the basic set-up. Suppose there are two users connected to the quantum internet, Alice and Bob. Now, let’s say Alice wants to transmit her qubit to Bob . She might want to do this for a number of reasons, such as for secure communication, large scale quantum computing, or secure quantum computing. First, Alice needs to establish entanglement with Bob. In other posts, we explain how the quantum internet establishes entanglement across long distances. For now, let’s assume that Alice and Bob are both connected to a working quantum internet and can successfully establish entanglement. A pair of entangled qubits are depicted above connected by the wavy line.

Once Alice and Bob have established entanglement, Alice can begin her teleportation algorithm. First, she performs some operations on her qubit that she wants to transmit and her side of the entangled connection with Bob. Next, Alice measures her two qubits and reports to Bob what she saw -- she can do this, for example, over the classical Internet. With this information, Bob performs one more operation on his qubit, which completes the process and results in the successful transmission of Alice’s qubit. This series of interactions is known as teleportation!

As you can see in the graphic, at the end of teleportation, Alice and Bob will need to re-establish entanglement to continue communicating. For now, we’ll just take this for granted, but in other posts we will dig deeper into how they can do just that.

In the above explanation, we skipped one key step -- Why did Alice need to measure her qubits? And what did she need to communicate to Bob? To understand how teleportation really works, we first need to understand one of the core elements of quantum networks: Bell states.

“Bell states” are a special type of entangled qubits. The core idea of quantum entanglement is the surprising fact that it is possible to generate a pair of qubits with correlations that would not be possible without the reliance on quantum states. This fact is actually one of the core benefits of quantum networks. We can use this correlation to unlock new applications like secure communication, distributed quantum computing, and more.

The unique thing about Bell states is that they are maximally entangled, meaning that they produce the strongest correlations we could hope for. This makes them perfect for quantum networks, which distribute entanglement around a network for applications to use.

There are actually four different Bell states, but it turns out that any of them work as well as the others. It’s just important you know which one you are working with.

Putting it all together

Coming back to our example of Alice and Bob, let’s take a closer look at how they perform teleportation.

First, Alice and Bob generate a Bell pair between them. As we said above, we are assuming that both Alice and Bob are connected to a functioning quantum internet, which can reliably establish entanglement on demand. Now, Alice has half of a Bell pair and her qubit, which she wants to transfer to Bob. To do this, she performs what is called a “Bell state measurement” on her qubit and her half of the Bell pair. At this point, Alice has just measured her two qubits, revealing two bits of classical data. At the same time, Bob’s side of the entangled pair is in a unique state. As a result of Alice interacting with her side of the Bell pair, she transformed Bob’s side as well. This is the magic of entanglement! However, the protocol is not quite done yet. Bob doesn’t yet have the original information from Alice’s qubit. There is one step remaining.

Coming back to Alice’s side, her Bell state measurement produced two classical bits. Those bits give an important piece of information. Right now, Bob’s qubit is stuck in a distribution of four different states. However, with the information from Alice’s measurement, Bob can recover Alice’s original qubit. In order to complete the teleportation, Alice needs to tell Bob which of the four outcomes she saw, so that he can perform one final operation on his remaining qubit. The specific operations are simple and pre-defined -- Bob knows exactly what to do when he receives the classical information from Alice. Once Bob completes his operations, the teleportation is complete! Bob’s qubit now has the state that Alice wanted to transfer.

This explanation should give you some idea of how the teleportation protocol allows users of the quantum internet to transfer qubits to each other. However, if this still feels like magic, that’s OK -- we left out some key details! For a closer look at teleportation and an explanation of why the protocol actually works, check out this essay from Andy Matuschak and Michael Nielsen.

Teleportation in the real world

Teleportation between two nodes, like Alice and Bob above, has been experimentally demonstrated by many different research groups, in many different scenarios (through a free-space link over 143 kilometers, across the Danube, and over a ground-to-satellite uplink). Most recently, Caltech demonstrated teleportation using telecom wavelengths, the wavelength of choice for building a quantum internet on top of existing classical infrastructure. The next step to enable teleportation for practical applications is the creation of reliable quantum repeaters.