As industries, organizations, and governments across the globe race to implement quantum technology, attention is turning to quantum networking as a path to mitigating security threats posed by quantum computing while simultaneously scaling the potential of quantum technology to solve problems we cannot tackle using classical technology alone.

What is AliroNet™ used for?

Implementing Quantum-safe security. The security of asymmetric algorithms (e.g., RSA, DSA, DH, ECDH) for authentication and key establishment relies on the assumption that it is infeasible for classical computers to solve certain mathematical problems. These math-based encryption algorithms are commonly used to protect communications, access, and data. Once quantum computing reaches its potential, secured systems, networks, communications, devices, and data will be rendered transparent. Traditional encrypted VPNs will be no more effective at safeguarding sensitive data than hosting the information on the open Internet. Harvest now, decrypt later (HNDL) attacks are attacks in which an adversary steals encrypted data they cannot currently decrypt, and holds onto this encrypted data until they are able to decrypt the data. Due to “harvest now, decrypt later” attacks, it must be assumed that all of an organization’s encrypted information and communications from before it implements appropriate quantum-safe security measures (regardless of the state of quantum computing at that time) is non-secure.

Migrating to quantum networks can often be a difficult, resource-intensive, and time-consuming resource to implement – but there’s a simpler, more efficient way to meet the challenges and leverage the benefits of quantum technology: AliroNet™.

What makes AliroNet™ different from other quantum networking solutions?

The steps you can take to ensure your organization is meeting the challenges and leveraging the benefits of the quantum revolution are part of a clear, unified solution. Each phase of implementing a quantum networking solution has been extremely challenging and resource intensive – until now. AliroNet™ is the most efficient and effective implementation of full scale entanglement-based quantum networks. In Deployment Mode, AliroNet™ is your full-scale quantum network, simultaneously enabling both quantum-safe data security and the interconnecting of quantum technology for advanced computing and sensing performance: 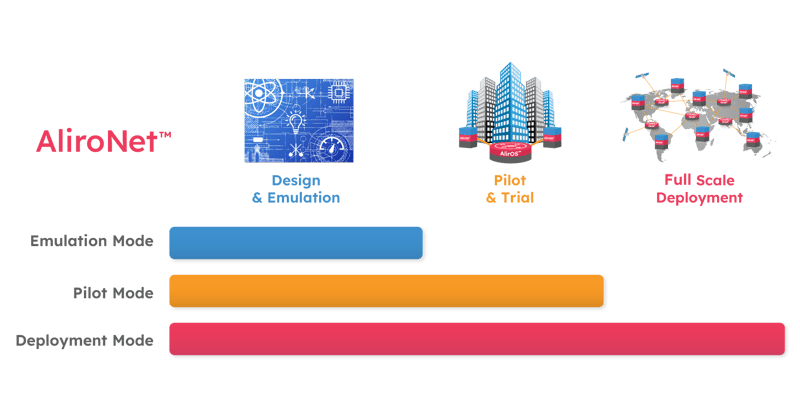 The next technology revolution will be quantum - and it's on our doorstep. Quantum technology has the potential to disrupt entire industries, bringing advancements not possible with classical high performance computing. AliroNet mitigates technology lockout by allowing your organization to test, validate, and incorporate more powerful quantum hardware as it becomes available, ensuring you’re ready for the tipping point of quantum technology deployment across the globe. The next step is to begin the planning and preparation phase: assessment, design, and simulation of your quantum network needs. Send an email to info@aliroquantum.com to get started.

Are you a professional exploring what the quantum technology revolution will mean for your industry and your organization? Aliro Quantum can help you understand the technology, how it can be used in your organization, how it will impact your industry, and provide resources to help you prepare for and navigate the quantum future. For more information on AliroNet™ and planning your quantum network visit our solutions.

Get up-to-date on the latest advancements in quantum secure communication and quantum networking deployment with our monthly newsletter.