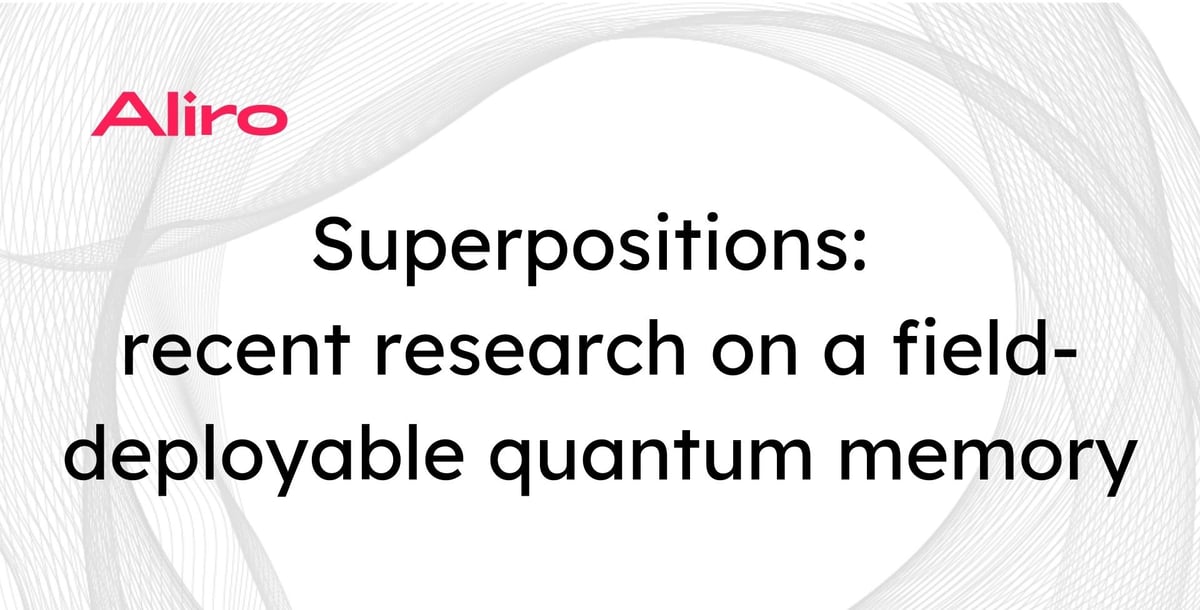 Would you tell us who you are and a little about what you do at Aliro?
Hi, my name is Matt Skrzypczyk, and I'm a software engineer at Aliro. And I work on developing the control plane software for our quantum network solution.

Before we dive into the research, what should we know?
Quantum information is really special, and we can't use classical networking techniques to reliably transmit quantum information on these networks, so we can't use store and forwarding mechanisms. We have this no-cloning theorem in the realm of quantum computing. That throws out any conventional techniques we have for sending information on networks out the window. What we have to deal with now is, how do we overcome transmission losses of quantum information over optical fibers. And so we have this theoretical construct in the network called the quantum repeater, which is supposed to alleviate this problem by taking long links and segmenting them into much shorter components and using these quantum repeaters to extend the range of the entanglement we're trying to distribute in the network. And so quantum memory arrays themselves are really important for realizing these quantum repeaters because it allows us to store this entanglement that we're distributing as part of the process of extending the range over which it can be distributed.

What’s a key takeaway from this particular research?
One of the key takeaways about this research is that it starts to bridge this gap between experimental realizations of these types of memories in an academic environment and really commercializing it and taking considerations of their integration to existing telecommunication networks going forward in the development of these networks. It kind of shows that what we've been working on in academia is really starting to develop into something much more, something much more practical that can be deployed in a realistic setting and used by a greater population.

What metrics are used to gauge performance of a quantum memory?
There's three very important metrics that are primarily use to characterize the performance of quantum memories. There's the fidelity, which evaluates the degradation of quantum information that you've stored in the memory. And there's also the storage efficiency and the storage time, which reflect how likely you are to be able to retrieve that information once you've started and how long you can reliably store it for.

So what makes the Qunnect device work?
So the main operating principle behind this quantum memory is based around a phenomenon called electromagnetically induced transparency, and what this phenomenon lets us do is stop a photon of light within a cloud of atomic vapor and later re emit that light for retrieval. Now, in the context of quantum networking, this photon carries the quantum information and trapping it inside of this medium lets us store that information and later retrieve it.

How does this research apply to quantum networks?
The quality of the quantum information that we use in quantum networking and quantum computation has a high impact on the performance of the network and the applications we're trying to run, so one of the things that needs to be taken into careful consideration is how well you can protect the information you're storing inside of your quantum memory from external environmental noise. So in this paper, where we studied this quantum memory, the engineers designing the memory take careful consideration of the possible sources of environmental noise that could be introduced on the quantum information that's stored. So they design an enclosure, specifically for being able to deploy the quantum memory in the field.

How well does this device perform with respect to the metrics from earlier?
The paper itself presents a quantum memory that doesn't necessarily make any breakthroughs in performance in any individual metric itself, like the fidelity or the storage efficiency. The paper itself makes mention of other realizations of these devices that greatly perform in individual aspects of these metrics, but what this paper tries to do is really consolidate across all boards on those metrics themselves - so they try not to sacrifice any particular metric at the benefit of another.

What does the research say about the device’s performance?
The optimization portion of the research really tries to drill down into the various tunable parameters that the user has over the quantum memory. So some things like some buffer gas pressure or temperatures, or additional optical components that may improve or degrade the quality of some of these metrics. So after first trying to find a healthy medium ground across all of these different dimensions, and really deciding on a set of metrics and performances of those metrics, the authors then go into benchmarking the device under various different settings and trying to showcase that their quantum memory can interact with certain types of input photons or support some sort of particular operation.

And what’s exciting about this device?
A lot of the experimental realizations that we've seen in the academic space with respect to quantum memories oftentimes has these devices operating at near zero Kelvin temperatures, so they're cryogenically cooled. And the problem with employing that type of system to maintain the operation of your devices that's very power consuming, and it doesn't scale practically to any large size. The important thing about the quantum memory that's developed by Qunnect is that it operates at near or above room temperatures, and in the paper they operate their device at around 60 degrees Celsius. And this is significant because to operate this quantum memory, you don't need this cryogenic cooling, and this extra source of power. And it means that you can also deploy many more of these devices without having a very large energy footprint.

What does all this mean for the future of quantum networks?
This research has some pretty interesting implications for the future. One thing this research shows is that there's an industrial interest in actually developing these networks and going ahead and trying to find ways to really implement them in practice. It shows that there are going to be more people trying to commercialize and develop these things, and they're going to be exploring ways to improve them. Another thing that it shows is that a lot of the research that we've been doing over the past few decades is now finally starting to come to that type of realization, as well as starting to leave the laboratory academic space and really enter into an industrial space, where there's a lot more funding and control over the development and design of these memories as well. While the these memories also have an implication on how we as designers of control plane software for these networks actually approach the problem of designing that control plane software itself. So with something like a memory, it may introduce changes into how we just design our own protocols or how we architect the networks themselves in order to improve the performance of these networks.

Special thanks to Matt Skrzypczyk. You can view this interview as a video.