What are quantum repeaters?

The quantum internet will change the world -- it will unlock applications ranging from ultra-secure communication to high-performance AI systems to unprecedented medical images. So what’s stopping us? Building a global quantum internet from today’s laboratory experiments requires the ability to transmit qubits over long distances. Quantum repeaters are the key to unlocking this.

Before we look at the role of quantum repeaters in the quantum internet, let’s consider an analogous device -- a non-quantum, or “classical,” repeater.

The Internet transfers information in the form of bits along fiber optic cables. Some of these cables travel long distances, such as the SEA-ME-WE 3 undersea cable that reaches from Germany to Japan. However, as light passes through these fibers, it suffers from loss, or “attenuation,” as photons are absorbed by the fiber. To account for this, a “repeater” is inserted between nodes. Repeaters simply measure the signal coming in from one side, copy it, and retransmit it at higher power to the other side. As a result, the quantum internet is able to transmit information reliably over very long distances.

Loss is a problem in quantum networks as well, but unfortunately the same technique of measuring, copying, and retransmitting doesn’t translate to the quantum communications realm. This is due to a fundamental aspect of quantum information -- it cannot be copied. This fact is known as the no-cloning theorem.

It turns out that we can’t measure quantum states on their way from point A to point B without destroying them. This actually provides some of the amazing benefits of quantum communications, like ultra-secure communication, but also means that we can’t use the same idea from classical repeaters to avoid loss in quantum channels.

So, how can we avoid the problem of loss in a quantum network?

Despite their name, quantum repeaters actually use a very different strategy than classical repeaters to handle the problem of loss. The core idea is based on the technique of entanglement swapping.

The primary goal of quantum networks is to distribute entanglement between members of the network. Entanglement distribution unlocks all kinds of applications, including even transmitting qubits. Entanglement swapping is a clever idea that gets around the problem of loss without violating the no-cloning theorem. 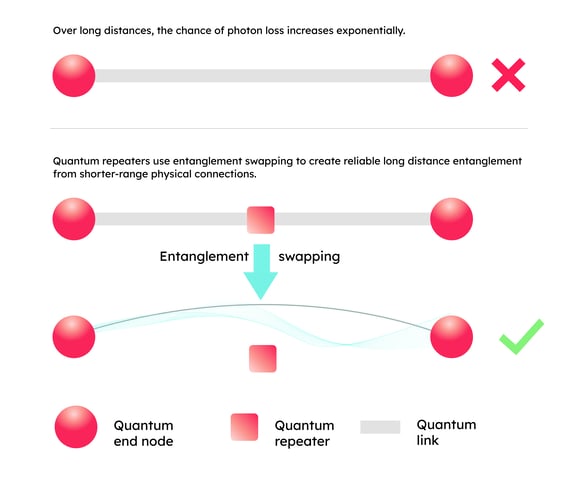 While the act of “gluing” together two separate entanglement links may sound magical, the repeater can do this using a simple operation called teleportation. As long as the repeater has qubits that are entangled with pairs at each of Alice and Bob, it can perform a measurement and report to Alice and Bob the information they need to use their newly entangled connection. By building up a chain of repeaters, we can break down long distances into more manageable segments over which to send our photons.

Teleportation between two nodes has been experimentally demonstrated by many different research groups, in many different scenarios (through a free-space link over 143 kilometers, across the Danube, and over a ground-to-satellite uplink). Most recently, Caltech demonstrated teleportation using telecom wavelengths, the wavelength of choice for building a quantum internet on top of existing classical infrastructure. So if we already have such a plethora of successful quantum teleportation experiments, why can’t we build real quantum repeaters? Well, efforts are already underway for some early demonstrations. However, the first repeaters need to be designed to handle the limitations of current devices. In fact, a timeline of repeater technology has emerged, separating repeaters into three categories: 1st generation, 2nd generation, and 3rd generation. These generations do not necessarily make each other obsolete, but they show how networks can expand to support increasingly powerful applications as technology improves. 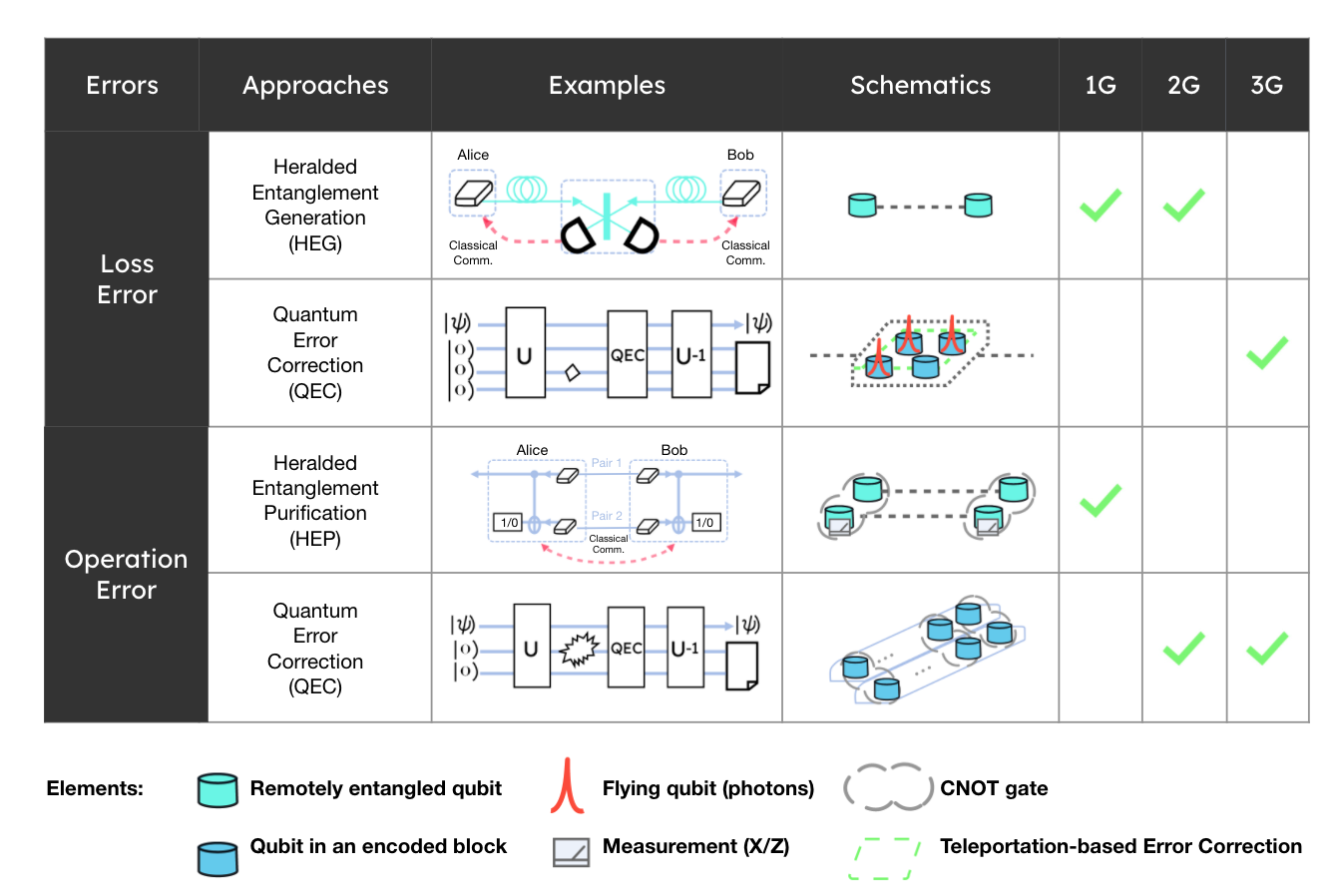 As error rates improve, quantum repeaters can transition from relying on entanglement distillation to quantum error correction to handle operation errors. Quantum error correction handles errors by encoding information into blocks of qubits, where errors can more easily be handled. This will allow networks to transfer information at much higher speeds and enable further applications.

Finally, once quantum devices have improved enough, quantum error correction will be able to be used to handle both loss and operation errors. Essentially, this allows nodes to trust that their information will travel safely to other nodes, without having to listen to hear from each repeater that entanglement was established. This will have a huge improvement on the rate of communication and unlock even more applications. 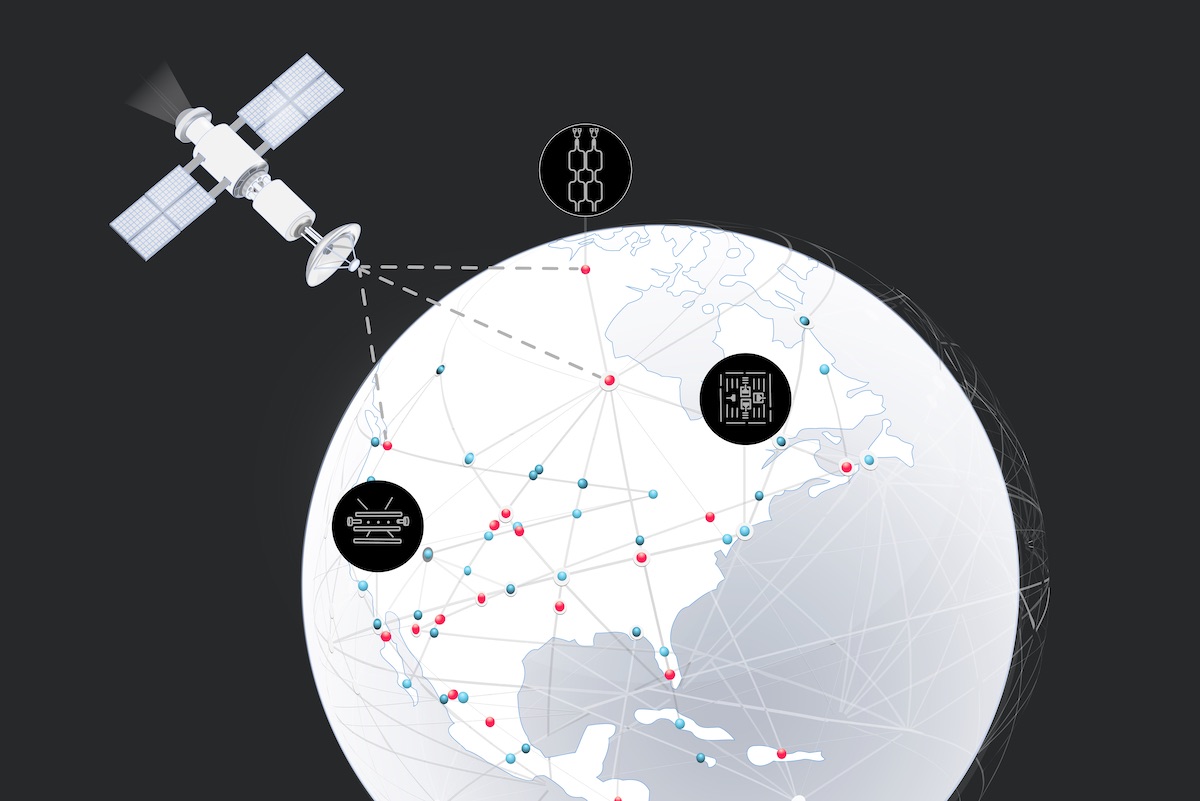 Quantum networks are already under development! For example, the Center for Quantum Networks, hosted at the University of Arizona, plans to develop the first quantum network enabling fully error-corrected quantum connectivity, enabled by quantum repeaters. Similar efforts are underway in National Labs and at Universities across the United States and the globe. Developing working quantum repeaters will be a key to the success of these efforts.