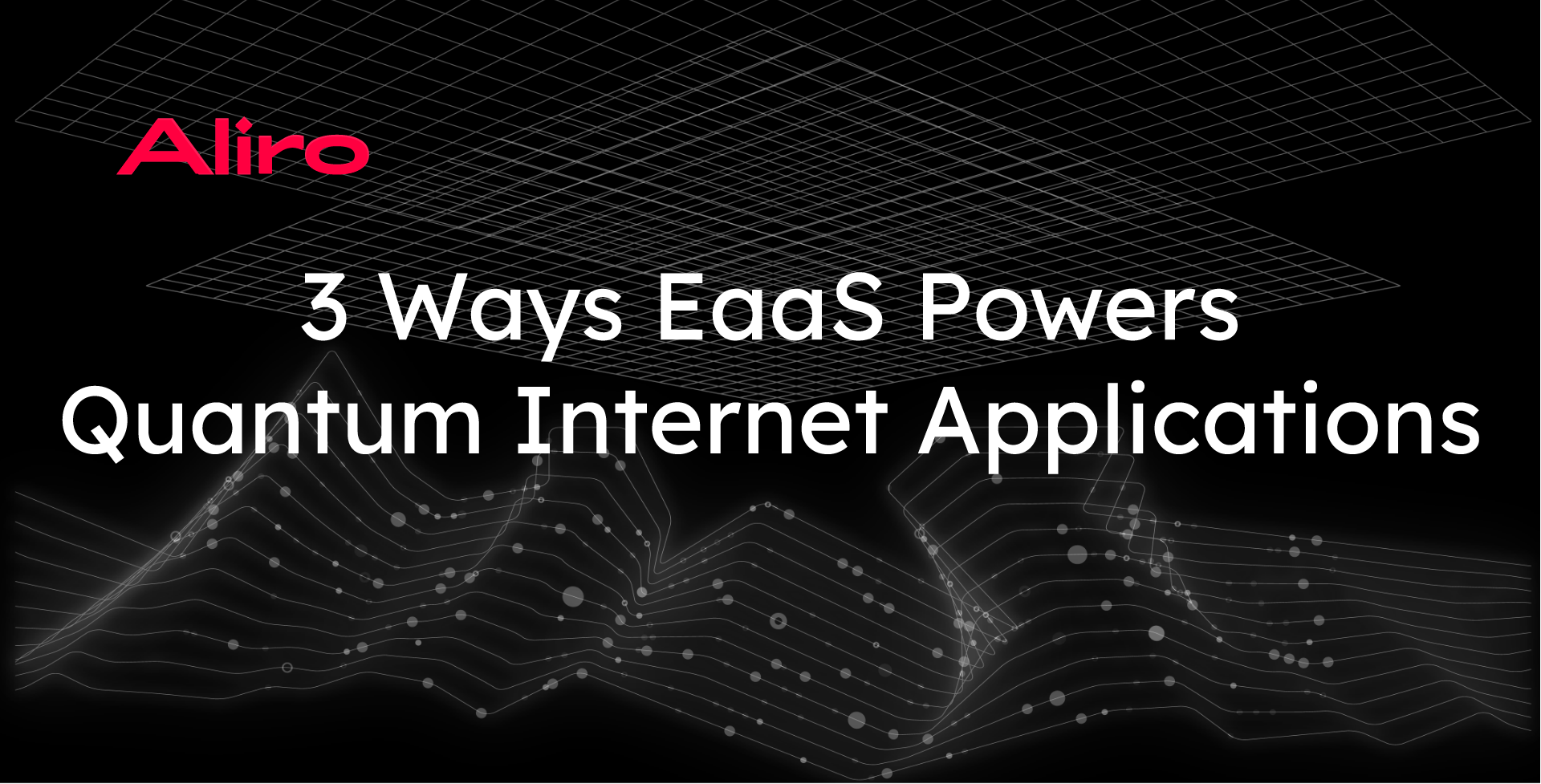 This contrasts with another kind of quantum network you may have heard of—Quantum Key Distribution (QKD) networks.

QKD networks differ from EaaS networks in that they are special-purpose. Where EaaS networks distribute entanglement, QKD networks use an approach called prepare-and-measure. Prepare-and-measure networks operate in three steps: (1) A sending endpoint prepares one of a handful of predetermined states on a single local qubit; (2) the qubit is immediately sent to another endpoint; and (3) the qubit is immediately measured at the receiving endpoint. These networks have no quantum memory, so when an endpoint receives a qubit, it must immediately measure it, collapsing the wave function and destroying the state.

Prepare-and-measure works for QKD on short distances, but we need quantum entanglement for other use cases such as clustered quantum computing and long-distance secure communication.

The following diagram shows an example of an EaaS quantum network:

As shown in the next figure below, the quantum routers / repeaters and the endpoints in the EaaS quantum network run various protocols to:

1. EaaS networks are inherently secure because they use teleportation

EaaS networks use quantum teleportation to communicate without ever sending secret user qubits across the fibers or the quantum routers in the network. Instead, the secret user qubits are teleported directly from the source endpoint to the destination endpoint. They never touch the fibers or quantum routers and hence they cannot be observed by an eavesdropper on the network.

There are some experimental QKD technologies (for example MDI QKD and twin field QKD) that support star topologies and/or larger distances (up to 600 km in theory) but these technologies are not yet commercially available.

To extend beyond these short distances and limited topologies, QKD networks use trusted intermediate relay nodes. Relay stations are placed along a chain between nodes, where the secret key is measured and regenerated. This allows for a connection to extend much further, but requires revealing the secret key to the relay node. This makes QKD unsuitable for scenarios where the users rely on external networks.

The first commercially available EaaS networks will also be point-to-point networks and will also be subject to the same distance limitations of 50 to 150 km. Key applications at this range include clustered quantum computing and metropolitan-area secure networks.

Quantum repeaters offer the key to extending networks to longer distances. Once quantum repeaters and quantum routers become available, EaaS networks will be able to support quantum networks that have arbitrary topologies (not just point-to-point or star) and that can support large endpoint-to-endpoint distances. Quantum repeaters have been demonstrated in the lab. The enabling technologies for quantum repeaters (i.e. quantum memories) will become commercially available off-the-shelf just as single photon sources and detectors are today.

3. EaaS networks are general purpose instead of single purpose

As a classical analogy, the plain old telephone service (POTS) network at the end of the 20th century was a special-purpose network that only provided voice service. It has now been replaced by voice-over-IP (VOIP) which is just one of many services running over the general-purpose Internet.

How to make the quantum leap

Service providers and enterprises interested in protecting their data using EaaS have several options to begin building in-house expertise. Providers can begin by working with a quantum networking provider to understand how they can add EaaS functionality to their network. As a first step, providers can use quantum network simulators to build knowledge without investing in a physical network. If you are interested in learning more about how EaaS can work with your network, please get in touch.